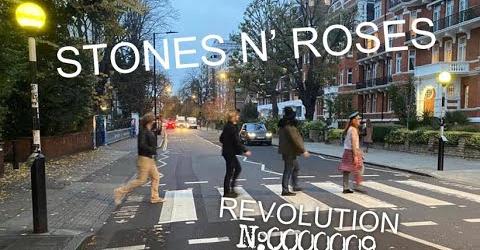 REVOLUTION #9 BY STONES N’ ROSES (RECORDED AT ABBEY ROAD STUDIOS 16/11/21)
The most rockin’ ridiculous Beatles cover ever recorded? An amped-up Twist & Shout-style version of the Beatles’ “Revolution 9”, recorded at Abbey Road studios with Beatles Anthology, Rock Band and Vegas show engineer Chris Bolster. Most of the Roses’ act is doing Stone Roses songs mashed up with bits of the Rolling Stones and Guns n’ Roses but, to confuse their audiences further on their recent UK tour, they forced Brits to endure this fab rocker….and they loved it.

Singer Ian Brownstone dreamed up the arrangement over 30 years ago but it wasn’t actually played until 2007 when he performed at a Beatles tribute show in Los Angeles as the modestly-named Beatles US. A video of that performance on Youtube has delighted and riled up over 35,000 viewers over the years. For the recent Roses tour, they decided to resurrect “Revolution 9” and couldn’t think of a more absurd song to record at famed Abbey Road Studios in London.

The song is crammed with Beatle bits plus winks and nods to the Stone Roses and the Rolling Stones. See if you can spot all eight songs referenced in just 87 seconds delivered by a SMOKING backbeat band of San Diego all-stars on hallowed studio ground and lovingly mixed by Mike Kamoo of Earthling Studios back in California.

For a free mp3 or wav of “Revolution 9”, follow us on social media @stonesnrosesusa and drop us a message.