TODAY: Four Surf Films for only $10!! Air Conditioned in Oceanside. 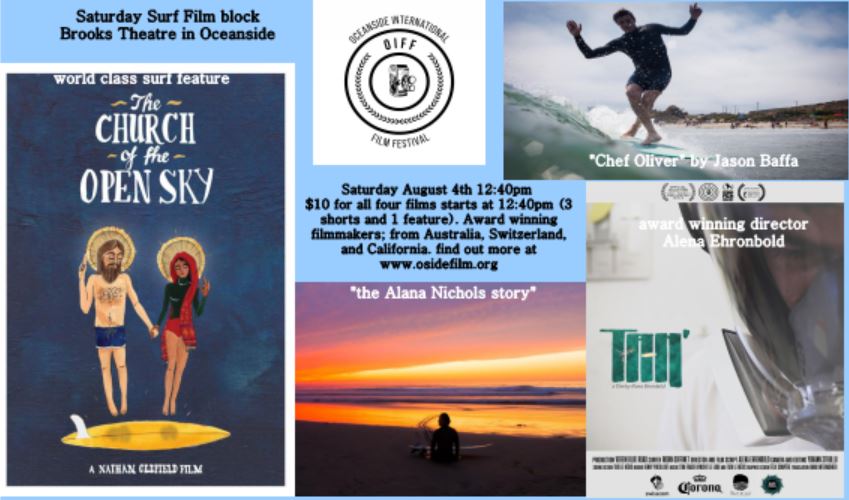 Beat the heat in air conditioning and check out some amazing films, sip a beer from a local craft brewery or enjoy one of the many Line 39 Win selections. All Ages and only $10.

The Oceanside International Film Festival is excited to bring this block of four surf related films from around the world and locally in this special slot on Saturday afternoon August 4th. The Surf block starts at 12:40 runs until about 2pm. The Surf Film Block will feature three short films and one feature length film.

The shorts include “The Alana Nichol’s Story”. This film about a challenged athlete north county surfer was made by 15yr old Eli Benson from Carlsbad, California. Alana Nichols is a paralyzed athlete who has won multiple gold medals at the Paralympic games. This story covers how she came back from a life-changing injury and competes at the highest level possible in Paralympic surfing. And did I mention the director is 15 years old!

Also, in the shorts you can see “TAN” s short film by award winning filmmaker Alena Ehrenbold from Switzerland. Alena has won awarded recently for her amazing feature film “Blue Road” we are proud to Premier this film for the first time on the U.S. West Coast. In a world in which consumer society is setting an ever-accelerating pace, a young French sharper faces the challenge of staying true to his own rhythm in life. “TAN” (Creole for “time”, Breton for “fire”) tells the story of Robin Goffinet, a passionate surfer based in Finisterre (Brittany) and dedicated to the creation of sustainable surfboards.

The feature and headliner “Church of the Open Sky”, is an incredible visual feast shot in Australia, New Zealand, Sri Lanka and Papua New Guinea. The film features Dave Rastovich, Lauren Lindsey Hill, Alex Knost, Neal Purchase Jr and local north county surfer Devon Howard.  The film crafted by award winning filmmaker Nathan Oldfield (Lines from a Poem, Seaworthy, The Heart & the Sea) from Australia is an inspired and endearing representation of the surfing experience, where all participants are worthy and welcomed – to learn, play and grow together – in inclusive, sacred playgrounds beneath The Church of the Open Sky.

Tickets are available at www.osidefilm.org